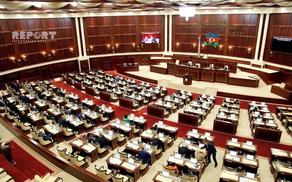 As Assistant to the President of Azerbaijan, Head of the Department for Foreign Policy Affairs of Azerbaijan's Presidential Administration Hikmat Hajiyev says, President Aliyev approved the decree adopted by the Milli Majlis.

The decree has already been enforced.

The martial law has been declared in Baku, Ganja, Yevlakh, and Goygol.

The curfew will be in force in other areas.