Azerbaijan discusses issues of cooperation with ICESCO in education - VIDEO

Azerbaijan discusses issues of cooperation with ICESCO in education 12 January, 2021  15:06 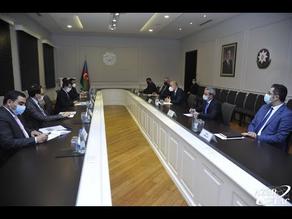 Emin Amrullayev, the Minister of Education of Azerbaijan, met with a delegation led by Salim bin Mohammed AlMalik, the Director-General of the Islamic World Educational, Scientific, and Cultural Organization (ICESCO); AZERTAC reports.

The sides discussed current issues in the field of education and prospects for bilateral cooperation. It was noted that by the relevant order of the President of the Republic of Azerbaijan, Ilham Aliyev, a total of 51 students would study in higher educational institutions of Azerbaijan under the educational grant established for the citizens of the Organization of Islamic Cooperation (OIC) member states.

Minister Emin Amrullayev spoke about the Karabakh conflict's events last year, which began on September 27 and lasted for six weeks. According to him, ten pupils were killed, 16 injured, and 54 educational institutions were destroyed due to attacks by the Armenian armed forces. Appropriate steps had been taken to eliminate the damage.

As part of his visit to Azerbaijan, ICESCO Director-General Salim bin Mohammed AlMalik will visit the liberated territories.