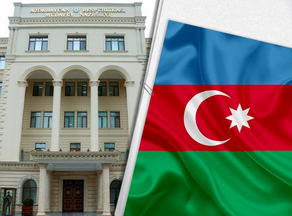 The Armenian armed forces have kept shelling the Tartar and Geranboy districts, the statement by the Ministry of Defence of Azerbaijan reads.

According to the Ministry of Defence of Azerbaijan, Azerbaijan Army units shot down the enemy's Su-25 fighter jet, which attacked our positions from the air.

During the day on November 1, units of the Armenian armed forces attempted to attack in Zangilan region of the Armenian-Azerbaijani border. During the battle, the enemy, which lost about 30 personnel, was forced to retreat to Armenia's territory.

The Ministry of Defence of Azerbaijan informs that on November 1 and night, on November 2, Armenian armed forces fired at the positions of Azerbaijan Army units and our human settlements in different directions of the front using various weapons, including artillery and missiles.The combat operations continued mainly in the Aghdam, Khojavend, and Gubadli direction.

Defending enemy units were forced to retreat, suffering losses in personnel and military vehicles in some front directions. The enemy is facing a shortage of weapons, ammunition, and food supplies. There is a lack of spare parts for auto and other military vehicles.

"During the day and night, many enemy forces, 4 - BM-21 "Grad" MLRS, 10 - different types of howitzers, 3 - trucks loaded with ammunition, and 5 - other auto vehicles were destroyed and wrecked in different directions of the front.

At present, our troops are monitoring the operational situation," the statement reads.

Additionally, the body says that the Armenian armed forces are shelling the villages of Aghdam and Aghjabedi regions starting from 06:00 a.m. on November 2.