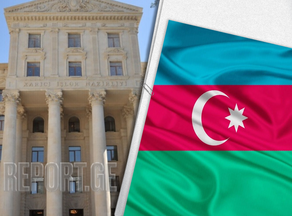 On December 22, Valérie Pécresse, President of the Regional Council of Ile-de-France and a presidential candidate of the Republican Party, illegally visited the city of Khankandi of the Azerbaijani Republic.

This visit, accompanied by other French politicians as part of the election campaign, is a violation of the country's national legislation, directed against the sovereignty and territorial integrity of Azerbaijan.

In this regard, the French chargé d'Affaires in Azerbaijan was summoned to the Foreign Ministry and presented a note of protest.

The Foreign Ministry reminded that these French citizens, who seriously violated the requirements of the relevant laws of the Republic of Azerbaijan, are responsible in accordance with Azerbaijan’s national legislation.

The note of protest underscored that this step by a group of French politicians might damage the Azerbaijan-France bilateral relations, as well as France's regional reputation and the role it could play in the normalization of the Azerbaijani-Armenian relations after the end of the conflict.

"The names of French citizens, who illegally visited Azerbaijan, have been included in the list of people declared as persona non-grata in Azerbaijan," the ministry said.