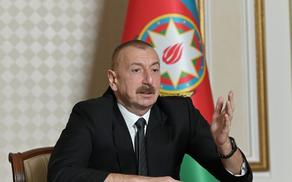 "I think what President Trump does with respect to the conflict resolution, is fully in line with international relations,'' Azerbaijani President Ilham Aliyev told Fox News.

"President Trump's comments on criticism on Turkey I did not see it by the way in the press but his comments were constructive. The United States does not take sides and other co-chairs should also don't take sides,'' he stated.

"We understand internal politics not only in America but also in France and Russia with a very large Armenian community which influences which has a lot of lobbying activity and which is now in a full operation against Azerbaijan. We understand the level of pressure which they can impose, but at the same time, a very straightforward position of President Trump is highly supported here in Azerbaijan,'' Aliyev said.