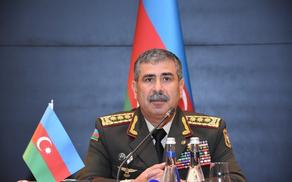 Military operations have been underway since the early morning at the Azerbaijan – Armenia border.