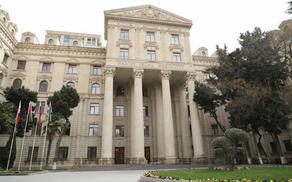 " As always, the President of the Republic of Azerbaijan has expressed his views quite clearly and concretely. If the Armenian Foreign Ministry wants to present what it hears in the way it wants, it is already an indication of their malicious intentions," Head of the Press Service Department of the Ministry of Foreign Affairs Leyla Abdullayeva said in a statement.

Answering the Armenian Foreign Ministry’s statement claiming that the President of the Republic of Azerbaijan has threatened to use force against Armenia, Abdullayeva said: “We would like to bring to the attention of those who want to interpret the views of our President that in an interview on April 20, the President of Azerbaijan spoke about the possible revanchism and threats to our territorial integrity in Armenia and said, "If we identify a possible threat, we will destroy it ... because it is a matter of defense, a matter of national security," - he said. This is not a threat to Armenia's territorial integrity, as claimed by the Armenian Foreign Ministry, but an indication of our determination to respond to any possible threat from Armenia to the territorial integrity of Azerbaijan within its internationally recognized borders.

I would like to remind that in his interview, the Head of state also said that Azerbaijan was ready to cooperate, emphasizing that despite the genocide committed by Armenia against Azerbaijanis at the state level and the destruction of our historical, cultural, and religious monuments, we must look to the future.

As stated repeatedly and at the highest level, Azerbaijan is ready to normalize relations with Armenia on the basis of the principles of international law, in particular the sovereignty of states, territorial integrity, and inviolability of international borders. The implementation of the trilateral statements signed on November 10, 2020, and January 11, 2021, also serves this purpose. Unfortunately, instead of implementing the trilateral statement, Armenia is poisoning its own population and trying to mislead the international community with its lies and slander,” she said.