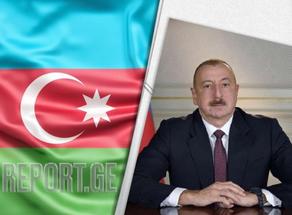 "I would like to hope that this is so, because Azerbaijan has repeatedly stated its readiness to start a dialogue with Armenia. It is not just about starting a dialogue, but also about the future peace agreement between Azerbaijan and Armenia. The war is over, the conflict has been resolved."

Report.az informs that on September 28, Azerbaijani President Ilham Aliyev said this in an interview with France-24 TV channel, while answering a question that "Exactly a year has passed since the beginning of the war between Azerbaijan and Armenia, which your country won in 44 days. For the first time since the end of the war, the foreign ministers of the two countries - Azerbaijan and Armenia - have met. Does this mean a resumption of dialogue between the two sides and hope for peace?"

"We must start fresh activities to make the region more predictable, stable and secure. The meeting of the foreign ministers of the two countries is a good indicator of these efforts. I hope this is not just a meeting, but the beginning of a new process between Azerbaijan and Armenia and will be a process of normalization of the relations and a process that will give a new dimension to broad cooperation in the South Caucasus region," he said.