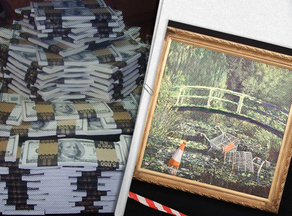 A painting by England-based street artist Banksy, entitled "Show me the Monet," sold for 7.6 pounds ($ 9.8 million) at Sotheby's auction in London. The auction house writes about this on Twitter.

In his work, the street master referred to the "Japanese Bridge," a masterpiece by Claude Monet, and added abandoned shopping trolleys and a traffic cone to the garden scene.

According to Sotheby's, the auction lasted 8 minutes, and an Asian investor purchased the painting.

Banks' most expensive work is Devolved Parliament. It depicts monkeys sitting in the British Parliament. In 2019, the painting sold for 9.9 million pounds ($ 12 million).