Bayramov and Reeker discuss situation on Azerbaijan-Armenia border 14 May, 2021  17:06 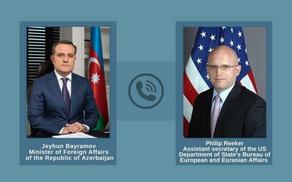 The Minister of Foreign Affairs of Azerbaijan, Jeyhun Bayramov, had a telephone conversation with Acting Assistant Secretary of State for European and Eurasian Affairs, Philip T. Reeker.

According to the Azerbaijani Foreign Ministry, the sides exchanged views on the situation in the region and tensions on the border between Azerbaijan and Armenia.

Bayramov stressed that Azerbaijan is committed to easing tensions in the region. He noted that to resolve the tense situation on the border, the leadership of the State Border Service of the Republic of Azerbaijan was in the area for several hours, and negotiations are underway with the other side.