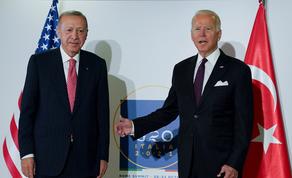 U.S. President Joe Biden has shown a "positive attitude" toward the purchase and modernization of F-16 fighter jets, President Recep Tayyip Erdoğan said during a press conference at the G20 summit in Rome Sunday.

Erdoğan had earlier held a meeting with his U.S. counterpart and said they were planning to have a "good conversation" regarding the possible purchase of the jets.

Asked about whether he could “confirm” Biden’s remark on East Mediterranean, Erdoğan said that it was not discussed as the topic was not on Biden’s agenda or his.

During Erdoğan's presser, he touched upon the after-effects of the COVID-19 pandemic on the world economy, saying that although it had started recovering in 2021, "our economies are still facing serious challenges."

He also touched upon the continued support of the United States for terrorist organizations in Syria, namely the YPG, an affiliate of the PKK, saying that he has expressed Turkey's reservations regarding the matter.

"I also told him (Biden) these issues were steps that could damage our solidarity. I believe the process that has been continuing until now will not continue like this from now on," he said.

Regarding climate change, one of the main subjects of the G20 summit in Italy, he said: "It is shameful that the biggest contributors of environmental degradation spend two times more to keep migrants out than they spend on fighting climate change."

The president also said that Turkey is not considering enduring another wave of migration from Afghanistan after the Taliban takeover in August.