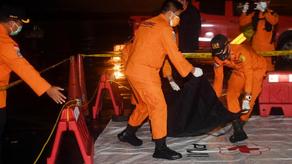 Body parts and debris were hauled from waters near Indonesia's capital on Sunday from a Boeing passenger plane that crashed shortly after take off with 62 people on board.

The Sriwijaya Air Boeing 737-500 plunged into a steep dive about four minutes after it left Soekarno-Hatta international airport in Jakarta on Saturday afternoon.

No reasons have yet been given for the crash, with authorities focusing on a frantic search and rescue effort that appeared to offer no hope of finding any survivors.

"As of this morning, we've received two (body) bags, one with passenger belongings and the other with body parts," Jakarta police spokesman Yusri Yunus told Metro TV.