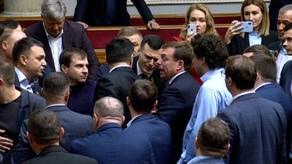 A fight broke out in Ukraine's parliament as the deputy from Oppositional Block fraction Nikolay Skorik opposed member of "Servant of the People" Nikolay Tishenko.

The fight followed the discussion of formation of Temporary Investigative Commission in Odesa, which must study developments of 2 May 2014.

Tishenko grabbed a button from Skorik's jacket, with this causing the brawl in the parliament. Ruslan Stepanchuk's appeal to maintain order eventually calmed the deputies down.