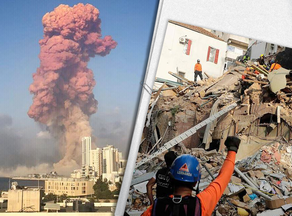 In the Lebanese capital, Beirut, in the rubble caused by an explosion, rescuers found two bodies due to a thermal screening. One of them is an adult. The device records only one human breath at this time - 18 beats per minute. Rescuers received the first impulse signal yesterday. There is still a small chance that this person is alive and can be saved.

For reference, a living person got rescued from the rubble in Haiti 28 days later.

A Chilean search and rescue team in Beirut say they have detected a possible heartbeat of a body under the rubble of a building destroyed by the August 4 blast. If true, then that would mean that the person would have been stuck under the wreckage, alive, for 29 whole days. pic.twitter.com/uLWIq5ociA

In the Lebanese capital, Beirut, rescue services resumed search operations a month later after finding an impulse signal, hoping to find a survivor of a large-scale explosion.

The Chilean rescue team used a device to detect a human heartbeat at the explosion site, hoping to find a living person there. The rescue team worked carefully at the blast site with their hands and shovels.

"We know 99% that there is nothing there, but even if there is at least a 1% chance that someone is there, we must continue the search," the Defense Ministry said.

According to a Chilean rescue team member, their equipment only detects human breathing and heartbeat and not of an animal. He also noted that the chances of a person surviving under the rubble for a month are very low.

After several hours of searching, the Chilean rescue team stopped the search, fearing that the wall left from the blast could collapse and endanger their lives.

On August 4, a large-scale explosion took place near the port of Beirut, the capital of Lebanon. The cause of the tragedy was 2 750 tons of ammonium nitrate, which was in a warehouse without following the safety measures. At least 190 people got killed in the incident. More than 6,000 were injured, dozens were missing. The blast affected several districts of Beirut. Citizens rallied over the incident and demanded the resignation of the government. Their demand was fully met, and on August 10, the Lebanese government resigned in full force.