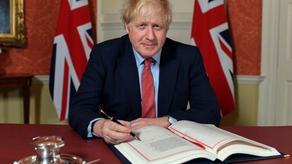 The prime minister hailed a "fantastic moment" for the country after he put his name to the historic agreement, which paves the way for the UK's exit from the European Union next Friday.

He said he hoped it would "bring to an end far too many years of argument and division",according to BBC.

Earlier on Friday, European leaders signed the document in Brussels, before it was transported to London by train. The corresponding tweets were made by the leaders.

Queen of Great Britain, Her Majesty Elizabeth II, signed the law on the country's withdrawal from the EU yesterday.

The UK Parliament has voted in favor of Brexit on 23 January.

Prime Minister Boris Johnson's Conservative party, which has supported Brexit, emerged a winner in the 2019 parliamentary elections, with the UK Parliament voting in favor of Brexit recently.

The UK will have to pay more than £200 billion for Brexit, with $173,8 billion having already been spent. As the Business Insider reports, the economic growth will slow down in the country as a result.