Californian forests in the fire again 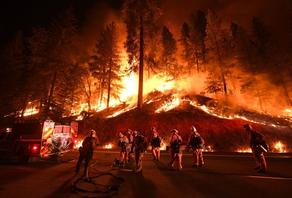 Californian forests are in the fire over the high temperature that sustains for several days. Thousands of hectares of forest in southern California are deteriorated by fire; local citizens are evacuated.

Rescuers are fighting several fire beds. Local media reports that a man set the fire. Law enforcers are searching the person suspected in setting the fire; is identity is known.

The evacuation of citizens of Plumas and Lassen has started at the order of local government.

Helicopters and airplanes are involved in the process. Awful heat interferes with firefighters' works.

The fire started at Hews Lake at midday and rapidly spread over hundreds of square meters.