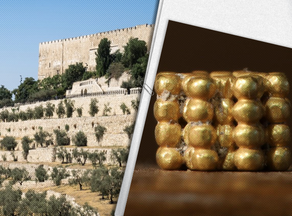 At the Temple Mount in Jerusalem, a 9-year-old boy named Binyamin Milt found a tiny golden bead that may be 3 000 years old. The Temple Mount Sifting Project writes about the finding.

The bead has four layers, each of which consists of tiny golden balls creating a flower. The artifact is so well preserved that, at first, archaeologists thought it was a modern item.

The examination revealed that the bead belongs to the era of the first temple (Solomon's Temple, which existed from 950 BC to 586 BC).

However, scientists note that gold objects of this period are extremely rare since, at that time, gold contained a large mixture of silver.