Clashes between firefighters and police in Paris - VIDEO 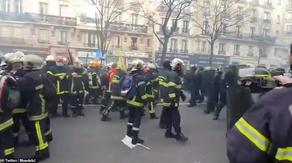 Euronews reports that the firefighters' protest in Paris ended with the clashes with the police.

Thousands of firefighters joined the protest in the French capital. They demanded early retirement and maintenance of the bonus. Police used tear gas and sound grenades against the demonstrators.

Several people got injured, and two arrested as a result. According to local media, the French Interior Ministry approved the request of the firefighters.

French Police clubbing Firemen!
You wonât see this on British news channels tonight!
Macrons France has been in revolte for some 63 weeks now.
Protests in most French towns & cities every weekend.
Not a peep from MSM. #GilletsJaunes@PaulEmbery
pic.twitter.com/o1RFydqmGH