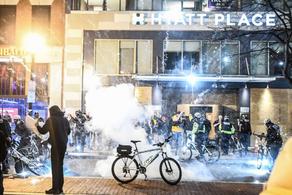 Violent clashes between pro-Donald Trump protesters and Black Lives Matter supporters on both sides of the country ended in bloodshed on Saturday, ABCnews reports.

In Washington, D.C., four people were stabbed as violence escalated Saturday night following competing protests during the day. The president's supporters, including the far-right Proud Boys, had gathered in the afternoon to denounce the results of the 2020 election -- baselessly decried as fraudulent for weeks by Trump.

Meanwhile, across the country in Olympia, Washington, a person was shot during similar protests on Saturday.

A person was taken into custody there.