Death toll after floods rises to 41 in Belgium 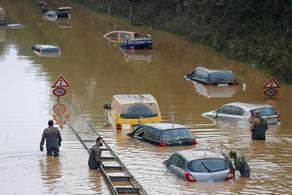 The death toll after the floods in parts of Belgium over a week ago has risen to 41, while two people are still missing, announced Walloon Minister-President Elio Di Rupo at a press conference on Tuesday.

While Di Rupo could not yet give an estimate of the total damage, he stated that 202 of the 262 Walloon municipalities are eligible to apply for help from the Disaster Fund.

“This gives you the scale of the drama we are experiencing,” he said.

Additionally, the Walloon government will set up a mechanism to facilitate donations, “because we will need a lot of money” for reconstruction, according to Di Rupo.

Belgium witnessed a new round of flooding on Saturday, as the country grappled with the impact of heavy rains and thunderstorms.