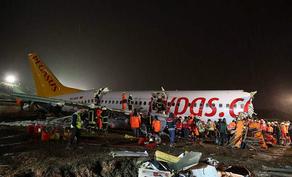 The number of victims of a plane crash at Sabiha Gokcen International Airport increased to three. There were 184 people aboard the Pegasus-type aircraft that crashed while landing. Some 179 passengers are in the hospital.

The plane, flying from the city of Izmir, suffered a disaster on Wednesday evening. According to the official statement, the aircraft broke into three parts and was on fire.