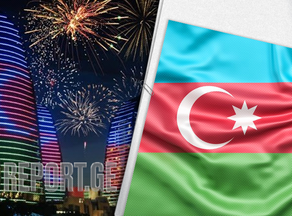 Solidarity Day of World Azerbaijanis is celebrated in more than 70 countries over the world. It is one of the most significant holidays for the Azerbaijani Diaspora, celebrated not only by Azerbaijanis but also the members of the Diaspora who were born in Azerbaijan.

Azerbaijan, located at the crossroads of Southeastern Europe and Southwestern Asia, is a key political, economic, and cultural actor in the eastern part of the South Caucasus. The country has made a significant contribution to the region's development.

Azerbaijan's national leader and late President Heydar Aliyev, the then Chairman of Supreme Assembly of Nakhchivan Autonomous Republic, declared December 31 as the Day of Solidarity of World Azerbaijanis on December 16, 1991.

Several tens of millions of Azerbaijanis live around the globe today. The majority of them dwell in their homeland and others in different countries worldwide.

Azerbaijani leader Ilham Aliyev says that the prime idea of World Azerbaijanis Solidarity Day is the unity of Azerbaijan, solidarity among its people, respect for national and spiritual values and connection of Azerbaijanis to their historic homeland.