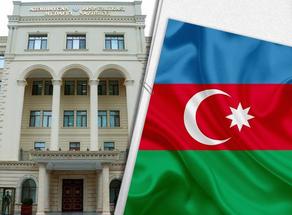 As the Defense Ministry of Azerbaijan reports, Armenia's armed forces are shelling the districts of Agdam, Terter and Aghjaban.

The Ministry of Defense of the Republic of Azerbaijan has again addressed citizens not to share military secrets on social networks.

According to report.az, the ministry urged citizens to be vigilant with the calls "Do not share every secret," "The enemy sees everything," "Do not shoot, do not share," "Do not share military secrets, keep quiet."

Notably, several photos and videos have been shared on social networks in recent days, which may be a fact for transferring military secrets to the enemy. Some users share photos and videos of military equipment, frontline areas, and service members.

On October 24 and on the night of October 25, the combat operations in the Aghdara, Khojavend, Fizuli, Hadrut, Gubadli, and Lachin directions continued with varying intensity.

Units of the Azerbaijani Army continued combat operations in specific directions of the front under the operational plan.

As a result of the Armenian armed forces' shelling by Azerbaijani Army units in Aghdara and Khojavend, the enemy has many dead and wounded in terms of workforce. The enemy's ammunition was exhausted, and artillery was destroyed.

Units of the 1st Battalion of the 543rd Regiment of the Armenian Armed Forces brought to Gubadli, withdrew, inflicting personnel and military equipment losses.

Our Army neutralized most of the conscripted service members sent to Nagorno-Karabakh from Tsakhkadzor settlement in the Kotayk region, Armenia.

As a result of the Azerbaijani Army's activities, many enemy forces, two tanks, 2 PDMs, 4 D-30 howitzers, one 2A36 Qiasint-B cannon, seven vehicles were destroyed and destroyed in different directions of the front.