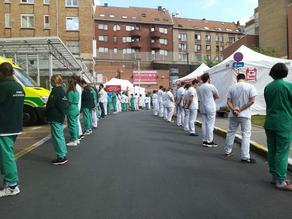 Due to the country's epidemiological situation, medical workers in Belgium organized a so-called shame corridor for Sophie Wilmes, the Prime Minister of the country.

Protesters expressed dissatisfaction with the new regulation adopted by the government and the healthcare system. About 120 employees of the medical institution took part in the action.

According to the doctors' union, the employees are protesting against the government's order, according to which overtime work has become mandatory.

Besides, doctors say, the government is allocating insufficient funds to fight the epidemic.