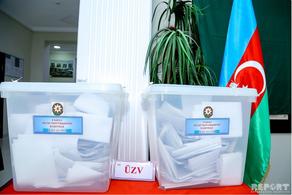 Early Parliamentary elections to be held in Azerbaijan tomorrow. The pre-election campaign is over. The Central Election Commission held press-conference on the topic. Mazahir Panahov, the Head of the Commission, declared that all districts are ready for the elections.

This year over one thousand and three hundred candidates will compete for one hundred and twenty-five places in Mili Mejlis. Each election district will elect one majoritarian candidate.

According to sociological inquiry, the ruling party, New Azerbaijan, is leading. The specialists forecast the majority of the mandates in the new parliament to be held by this party.

Based on the data of the Central Election Commission, 5 329 460 citizens will participate in tomorrow’s elections. The voting centers to open at 08:00 and close at 19:00.

Based on the exclusive information provided by Report.az, five thousand five hundred and seventy-three voting centers are equipped by the appliances with ID identification chips, which is to promote the voting process to a totally new stage.

The UN and EU Council Parliamentary Assembly Delegation to watch the elections. Over eight hundred foreign observers are registered to participate. Media from 132 countries will broadcast the voting process.

The results of the exit polls will be publicized after the voting process completion.

It is noteworthy that it is the first early election in the history of Azerbaijan. In December last year, the country President, Ilham Aliyev, requested the Leading Party for the early dissolution of the legislative body of the country and appointing the early Parliamentary elections. The party to agree with the President.