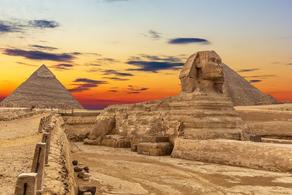 From the Giza pyramid complex to the Taj Mahal, tourist landmarks around the world remain shuttered as officials hope to slow the rise of coronavirus infection numbers.

For the millions around the world who'd rather be out exploring and not stuck at home, not all is lost: Egypt's Ministry of Tourism and Antiquities has launched a series of virtual and guided video tours of museums and archaeological sites around the country.

The move comes as the spread of the novel coronavirus has locked down countries and forced visitors and tourists to stay at home as part of measures to fight the pandemic.

"Meet you at the main hall at 8 PM," the ministry says on Facebook, teasing a tour of Museum of Egyptian Antiquities.

The videos, which take viewers through empty museums and other sites normally crowded with tourists, are available on the ministry’s official website and social media platforms such as Facebook, Instagram or Twitter under the slogan: “Experience Egypt from Home. Stay Home. Stay Safe."

The second of the virtual tours features the tomb of Queen Meresankh III, who was the granddaughter of King Khufu, builder of the Great Pyramid of Giza, and wife of either Khafre or Menkaure.

The first tour, released April 10, explored the Menna Tomb in Theban Necropolis, considered as one of the most beautiful tombs of the nobles on Luxor’s West Bank. It dates back to the 18th Dynasty.

Egypt has so far reported around 1,000 infections of the global pandemic, with 66 fatalities.