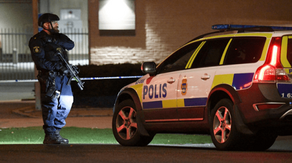 STOCKHOLM (AFP) - A man attacked eight people with a “sharp weapon,” seriously injuring two, in the Swedish city of Vetlanda on Wednesday (March 3), police said, in what they called a suspected terrorist crime.

The assailant was taken to hospital after being shot in the leg by police when he was taken into custody, following the attack in the southern Swedish city in mid-afternoon.

Speaking to AFP, police said the man in his twenties had used a “sharp weapon,” while local media reported the man had brandished a knife.