Eight miners killed by a mine collapse in Pakistan 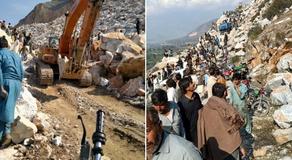 Eight miners killed and nine injured as a result of the mine collapse in the Buner region of Pakistan. Local media Samaa provides information.

According to the Samaa, the marble mine, the place of accident, has not been functioning for a long time. The workers went there occasionally during lunchtime. The reason for the rock collapse is unknown.

Allegedly, there are still several miners in ruins. The rescuers continue the search in the place to save the miners.

Pakistani TNN edition reports the number of victims might increase, given the hard injuries of some of the victims.