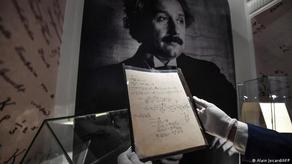 Albert Einstein's manuscript, in which he writes on the theory of relativity, sold for 11.6 million euros in Paris. According to DW, the information about this was spread by the auction house Christie's.

The 54-page document was written by the great physicist in Berlin and Zurich between 1913 and 1914 with his close friend, the Swiss engineer Michele Besso. This is one of the two surviving manuscripts of Einstein that deals with the development of the theory of relativity.

In addition, the lot sold became the most expensive scientific manuscript ever sold at an auction in France. The buyer of Einstein's manuscript is unknown.