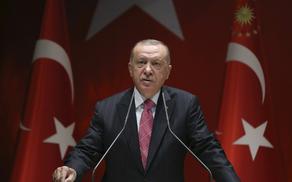 "I congratulate all Azerbaijanis, led by my brother Ilham Aliyev, on the liberation of the occupied territories and the whole of Nagorno-Karabakh," said Turkish President Recep Tayyip Erdoğan.

Turkey will be represented alongside Russia in the peacekeeping forces set up to monitor and control the agreement's implementation in the region.

An agreement was signed this morning on a joint Turkish-Russian monitoring center to monitor the ceasefire. This center will be established in the de-occupied region of Azerbaijan," the Turkish president said.