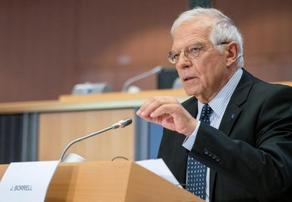 “I have just called the ministers of foreign affairs of Armenia and Azerbaijan to impress upon them that the ceasefire should be unconditional and strictly respected by the two sides. I have also underlined that attacks on civilians should stop immediately. They cannot be justified. I have reiterated that the EU remains ready to support the parties and the OSCE in a long-term solution to the conflict,” the official statement by EU High Representative/Vice President Joseph Borrel reads.

“The EU will continue to monitor the situation,’’ he concludes.

I spoke to @ZMnatsakanyan & @bayramov_jeyhun welcoming the Armenia and Azerbaijan humanitarian ceasefire. But fighting in and around #NagornoKarabakh continues leading to more civilian suffering. Ceasefire should be unconditional and strictly respected. https://t.co/JPcUpKuvUj