Event dedicated to friendship with Turkey in Azerbaijan

Event dedicated to friendship with Turkey in Azerbaijan 31 December, 2020  15:33 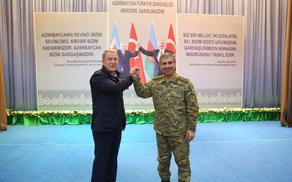 An event entitled "Azerbaijan-Turkey friendship is eternal and unbreakable" took place at the Training and Educational Center of the Azerbaijan Armed Forces. The Minister of Defense of the Republic of Azerbaijan, Colonel-General Zakir Hasanov, and a Turkish delegation led by the Minister of Defense, Hulusi Akar, attended the event.

In the beginning, a minute of silence was observed in memory of the fallen martyrs. Later the national anthem of both countries got performed.

In his speech, the Minister of Defense of Azerbaijan said that military cooperation between the two countries is based on brotherly and friendly relations, which are developing and strengthening. Colonel-General Hasanov said meetings like this one has special importance in expanding bilateral cooperation between Azerbaijan and Turkey.

The Turkish Foreign Minister expressed satisfaction with Baku and Ankara's relations and noted that close cooperation would continue.

Turkish President Recep Tayyip Erdogan greeted the participants of the event. He once again congratulated the state of Azerbaijan and its citizens on their victory in the Patriotic War.