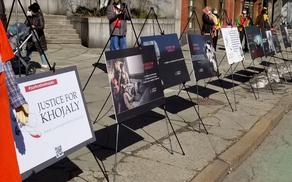 A photo exhibition showing the horrors of the Khojaly genocide was held near the United Nations (UN) headquarters in New York.

As Azerbaijani media outlets say, the Azerbaijan-New York Association organized the event supported by the State Committee for Diaspora.

The exhibition showed photos of innocent people killed by Armenian armed formations during the genocide in Khojaly.