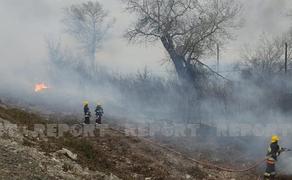 Firefighters extinguished the fire that erupted in the Shaki district of Azerbaijan.

According to local media, the flames covered an area of 10 hectares.

A severe fire broke out in the Shaki district of Azerbaijan, Azerbaijani media report.

The flames engulfed shrubs and grass cover on the Sheki-Gakh highway passing through Sheki. Due to the incident, there was a problem with the movement of vehicles.

Besides, power lines and communications burned down.

Three fire engines and 25 employees of the Shaki fire department of the Ministry of Emergency Situations are involved. Windy weather prevented them from working.

Operational measures are underway to extinguish the fire.