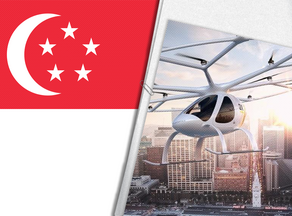 The German company Volocopter plans to launch the first air taxi in Singapore in the next three years. It can carry two passengers, The Business Times writes.

According to the publication, the company is preparing to open the representative office and hire up to 50 pilots. Engineers and other technical specialists will also be employed.

According to the plans, the first phase of the route will be planned in the southern part of the city-state, including near Sentosa's resort island and partly near the Marina Bay business district.

This flying machine visually looks like a helicopter, but it runs entirely on electricity. It can lift 450 kg in the air and cover 30 kilometers. Autopilot is also provided in the device.