Flag of victory at parade in Baku 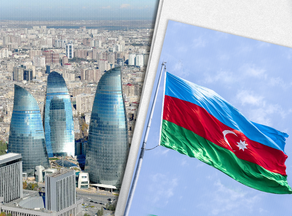 A parade dedicated to the victory in the Patriotic War of Azerbaijan continues in Baku.

A victory flag was hoisted on the square where the parade is taking place, the same one that appeared over the city of Shusha after the liberation from the Armenian Armed Forces.

The flag of victory was hoisted by "Hero of the Patriotic War," Major-General Zaur Mamedov, who was appointed the city's first commandant after Shusha's liberation.

The military parade showcases the most modern military and special equipment of the Azerbaijani Army.

The parade also featured military equipment and supplies of the Armenian Armed Forces, seized by Azerbaijan after its defeat.

The military parade was attended by military servicemen of the Special Forces of the Ministry of Defense, who have exceptional merit in achieving victory.

Representatives of the Turkish Armed Forces are also taking part in the parade.

The President of Azerbaijan, Commander-in-Chief of the Armed Forces Ilham Aliyev, and the President of Turkey Recep Tayyip Erdoğan are attending the parade.

More than 3 000 military personnel will take part in the military parade. Up to 150 units of equipment will be on display, including new military equipment, missile and artillery pieces, air defense systems, as well as warships and boats.