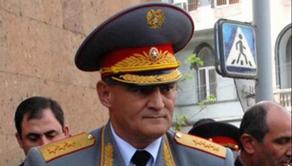 The former Armenian Police Chief Ayk Arutunyan was found dead in his house.

"The body of 64-year-old Ayk Arutunyan was found in his house in the village of Bzhni. The investigation started under the case of incitement to suicide", stated the Armenian Investigative Committee.

Ayk Arutunyan was the Minister of Internal Affairs of Armenia in 1999-2003.  He was leading the police from 2003-2008. Arutunyan had been questioned as a witness in the case of former Armenian President Robert Kocharyan.