Four dead in Myanmar as police fire on pro-democracy protesters 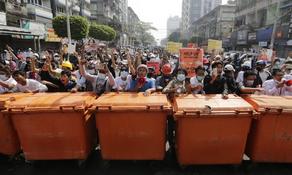 Police in Myanmar have fired tear gas, stun grenades and sprayed live ammunition into the air in an attempt to stamp out a major anti-coup rally, their most aggressive nationwide crackdown since the military seized power, The Guardian reports.

Four people have reportedly been killed in the violence, including three men in the southern town of Dawei, where at least 20 others have been injured according to Agence France-Presse. One man was also killed in Yangon, while several others were injured. Medics who had gone on strike in protest against the military coup went back to work in Yangon general hospital emergency department to treat the wounded.

Social media footage showed protesters in Yangon carrying bloodied people to safety, with one man filmed lying motionless on the road. It is not clear if the injured had been hit with live bullets, however live rounds were reportedly fired at Hledan Junction, a gathering point for people protesting against the 1 February military coup, and in Thaketa township in the city.