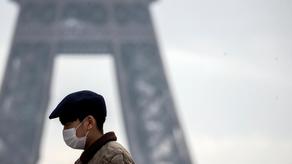 France on Tuesday reported 531 deaths from COVID-19 in 24 hours as the number of people in hospital and intensive care continued to decline.

There were 30,106 infected people in hospital, he said -- a daily decline of 478 in an encouraging downward trend.

There were also 250 fewer people in intensive care -- a crucial marker of epidemic decline -- for a total of 5,433, Salomon said. This represented the 13th day of decline in a row.

The total tally included 12,900 people who died in hospital and 7,896 in old age and other care homes.