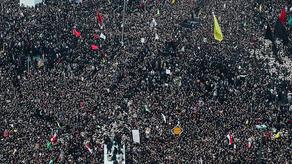 The funeral of Iranian General Qasem Soleimani, who was killed in a US military operation in Iraq, has been postponed. According to the Iranian authorities, a large number of people attending the funeral is the reason behind their decision.

According to the Fars agency, 40 people were killed and 200 injured in the funeral procession.

Hundreds of thousands gathered for the funeral in the city of Kerman.

According to the organizing committee of the funeral, General Soleimani will not be buried today. A new date for the funeral will be announced later.