Funeral of the Iranian general killed by US strike - PHOTO 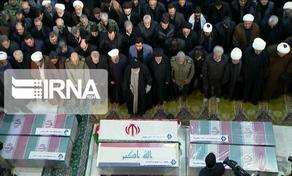 The funeral of the Iranian general liquidated by the US is being held in Tehran. Thousands of Iranians are attending the funeral. Ali Khamenei, the Supreme Leader of Iran, is also present at the ceremony.

The body of the Iranian general will be transferred to the city of Qom today. General Soleimani will be buried in his hometown of Kerman on Tuesday.