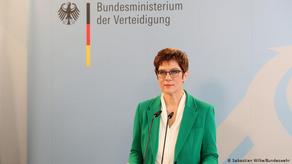 Speaking at the conservative Konrad-Adenauer Foundation in the south German town of Koenigsbronn, Kramp-Karrenbauer said: "Russia's arms build-up and its warfare in the middle of Europe has created real threats."

The defense minister accused Moscow, among other things, of stationing missiles "that can reach Germany without much warning."

"This happened in violation of the current arms control treaties and in secret," she said.