Head of World Trade Organization to step down early 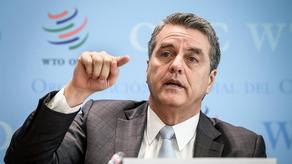 The head of the World Trade Organization said Thursday he will leave his post a year before his term expires, an unprecedented mid-term resignation at the WTO that he called a “personal decision.”

Roberto Azevedo, a former diplomat from Brazil, said he will step down on Aug. 31, cutting short a seven-year tenure marked in recent years by intense pressure from U.S. President Donald Trump, who accused the Geneva-based trade body of an anti-U.S. bias and other complaints.

“This is a decision that I do not take lightly,” Azevedo told a special meeting of WTO delegations. “It is a personal decision - a family decision – and I am convinced that this decision serves the best interests of this organization.”

The 25-year-old trade body has never had to fill a vacancy for the director-general post before that term expired, and under WTO rules, a selection process for a successor is to begin as soon as possible.

“Despite the many shortcomings of the WTO, Roberto has led the institution with grace and a steady hand,” Lighthizer said in a statement. “He will be difficult to replace.”