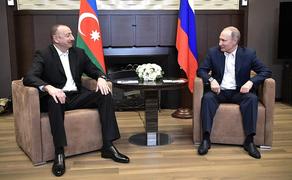 "Russia's shipment of military cargo to Armenia is a matter of concern to the Azerbaijani public," President of Azerbaijan, Ilham Aliyev, said in a telephone conversation with Russian President Vladimir Putin.

According to local media, the President of Azerbaijan told the Russian leader that after the end of the clashes on the Armenian-Azerbaijani border, the intensity of military supplies from Russia to Armenia from July 17 to this day raises concerns and serious questions in the Azerbaijani society.

Ilham Aliyev noted that in the wake of the clashes on the Armenian-Azerbaijani border, the volume of military cargo transferred from Russia to Armenia using the airspace of Kazakhstan, Turkmenistan, and Iran exceeded 400 tons, and his main reason behind the call was to find out the cause.

At the same time, Aliyev told Putin that the main purpose of the military attack was the involvement of a third party in the Armenian-Azerbaijani conflict.

Azerbaijani media writes that the President of the country informed his Russian counterpart about the confrontation in the Tovuz region on July 12-16.