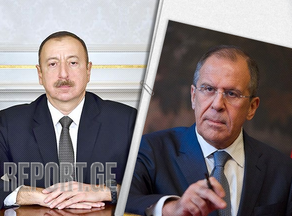 "I am glad that six months after your last visit to Baku, we can say with satisfaction that there is a positive dynamic in relations with Russia.

Also, as you know, we are in regular contact with Vladimir Putin. We are cooperating on the bilateral agenda and in the post-conflict situation in our region.

From a military point of view, the situation can be considered normalized, but there is still much to be done regarding political, economic, transport, and other aspects of future interaction. Azerbaijan considers Russia a friend and strategic partner, a neighboring country whose peacekeepers are helping to reduce tensions on Azerbaijani territory," he said.

For his part, Sergei Lavrov noted that he visited Azerbaijan on the occasion of the 98th anniversary of the country's national leader, Heydar Aliyev, and paid tribute to his memory. The Russian Foreign Minister confirmed that cooperation between Azerbaijan and Russia would continue in all directions.