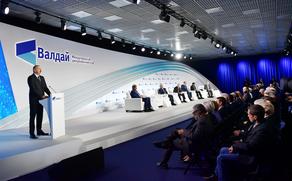 “Karabakh is Azerbaijan and an exclamation mark,” declared President of Azerbaijan Ilham Aliyev at the Valdai forum in Sochi.

The Azerbaijani President’s statement was a response to Armenian Prime Minister Nicol Pashinyan, who announced that Karabakh is the territory of Armenia.

According to Ilham Aliyev, the four resolutions by the United Nations Security Council adopted for the conflict regulation purposes have not been adhered to so far.