Ilham Aliyev: Nagorno-Karabakh conflict is in the past 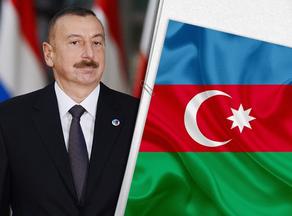 "A year has passed since the end of the war and Azerbaijan's victory in the Patriotic War. The post-war situation remains generally calm," Azerbaijani President Ilham Aliyev said. The local media reports.

He said the Nagorno-Karabakh conflict had been left in the past..

"Azerbaijan has restored its territorial integrity, fulfilled the UN Security Council resolutions. Azerbaijan resolved the conflict with Armenia by military-political means," the head of state said.

He said that Azerbaijan is ready to start negotiations with Armenia on the delimitation of the border but on the condition of mutual recognition of territorial integrity.

Ilham Aliyev stated that the main problems facing Azerbaijan now are demining the liberated territories and restoring the destroyed infrastructure.

According to the head of state, more than 150 Azerbaijani citizens were killed or seriously injured by detonated landmines after the end of the war.

"Armenia refuses to provide us with full maps of minefields. A small number of such maps handed over to Azerbaijan is about 25% accurate," the head of state added.

He said that as a result of almost 30 years of occupation of the liberated territories, almost all buildings and historical monuments had been destroyed.

"Of the 67 mosques in the liberated territories, 65 were destroyed, while in the remaining two mosques, the occupants kept pigs and cows, deliberately insulting the feelings of Muslims.

100% of buildings and houses were destroyed in the city of Fizuli and all villages of the Fizuli region. The same is observed in Aghdam and the Aghdam district. Aghdam is named the 'Hiroshima of the Caucasus.'