Ilham Aliyev: Our target was only military equipment 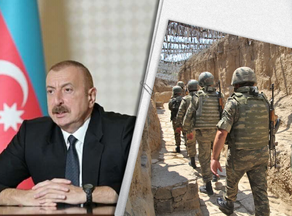 "The artillery bombardment by Azerbaijan stopped after the ceasefire announcement," said the President of Azerbaijan, Ilham Aliyev, in an interview with France 24.

He said that Azerbaijan never shoots at civilians in the cities and villages of the occupied territories.

"Our target was only military equipment. Our military objectives were very carefully set. So we only aim at targets that endanger the lives of our citizens and soldiers. Unfortunately, Armenians use the tactics of deploying military equipment in the cities where people live. We have to protect ourselves. Armenia violated the ceasefire, so we were forced to respond," Aliyev said.