Ilham Aliyev: Restoration of Karabakh has a special place in my work 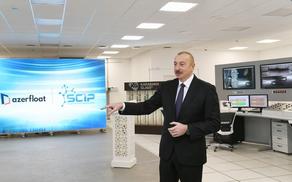 "My main job, of course, was to resolve the Nagorno-Karabakh issue and to be in charge of the war that began in September as the Commander-in-Chief. The restoration of these zones, the Karabakh region has a special place in my work," said the President of Azerbaijan, Ilham Aliyev, after establishing several enterprises in Sumgait.

At the same time, he said, the traditional activities are not left out, and the visit to Sumgait proves it.

"The war is over, our victorious army has won the war, defeated the enemy. We will do everything to rebuild the liberated lands. The main part of my daily work is dedicated to this. However, other territories' development will never be forgotten; the Azerbaijani people must be convinced of that. I am sure this year will be successful as well. We will build an even stronger Azerbaijan," Aliyev said.