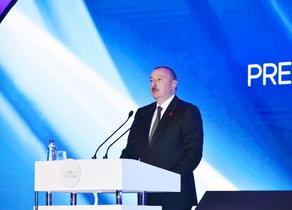 At the ceremony dedicated to the completion of Trans Anatolian pipeline (TANAP) construction the President of Azerbaijan, Ilham Aliyev spoke on the importance of the economic cooperation between the countries and mentioned that it would be difficult to talk on TANAP project but for the Baku-Tbilisi-Ceyhan oil pipeline.

“The Leader of Azerbaijan, Heydar Aliyev, had laid the foundation of the Baku-Tbilisi -Ceyhan oil pipeline by his own hands. Together with the President Erdogan we started the pipeline exploitation in 2006 enabling the transit of 450 million ton of oil from Azerbaijan and other countries. The biggest portion of the transit – over 400 million tons comes from Azerbaijan, 27 million – from Turkmenistan, 12 million - from Kazakhstan and 7 million -from Russia.

Baku-Tbilisi-Ceyhan became one of the most remarkable infrastructural projects not only for Azerbaijan but for other countries as well. It is successfully functioning today”, - said Aliyev

The President of Azerbaijan also mentioned the importance of Baku-Tbilisi-Erzurum project which is considered the predecessor of TANAP. It was open in 2007. Aliyev thanked all participants of the project.

“TANAP is the Southern section of the gas corridor. The gigantic project was commissioned with 38-billion-dollar investment. It consists of four projects, three out of which - Shah Deniz and Southern Caucasian Pipeline are already in exploitation. TANAP is ready to start today.

The project has become possible only because of the firm political will of Azerbaijan and Turkey. Though it needs to be mentioned that the project has been implemented with the participation of other countries and financial support of many private companies. Today the Southern gas corridor unites 7 countries. It is a project of international brotherhood.The project will serve a bridge between the countries and will open new ways for cooperation on other levels” – said Ilham Aliyev.